Just a short update: I recently received some fun stuff, including an Arduino Uno.

I’ve also been soldering some components together, and I’m really excited about getting into the Arduino Universe. So stay tuned for more updates on that topic.

As a first impression I shot a little video with two blinking LEDs (seen on the right side in the video):

Leaving the FEZ comfort zone – say hello to the breadboard

Posted on 18. December 2011 | Comments Off on Leaving the FEZ comfort zone – say hello to the breadboard

I’ve been very busy over the last weeks, but now I’ve taken some time to get deeper into the “core electronics part”, which simply means that I got a breadboard and some electronic components like resistors, transistors, LEDs and a lot of wires.

The first step was to get a normal LED on the breadboard blinking by connecting it directly to the Digital IO ports on the FEZ Panda board. Sounds easy but I did not want to break anything so after carefully reading some postings about the topic I connected die Digital IO port to a 220 Ohm resistor which was connected to the LED and then back to Ground. Using the OutputPort class on the given IO port the LED was blinking. That easy :)

As it was not as complicated as I thought it would be, I remembered the 2×24 LCD panel that I got from a friend. I wasn’t sure how it exactly works, but as I found out it has a HD44780 controller on-board that accepts 4-bit commands using additional wires for signals and power. And there is even a very useful C# class at the GHI Electronics website, nearly ready to use.

And guess what? After connecting the wires and including the pre-defined class I got the LCD working! Awesome!

I actually had to de-wire everything to put it back in the boxes for storage, but it’s not as hard as I thought to put everything together, so manybe I’ll use the LCD in some of the next projects.

And the next part of equipment is waiting: I just soldered the needed connectors to a 4×7 segment LED element, so stay tuned ;)

Posted on 24. July 2011 | Comments Off on Next: external power supply and SD card

After taking a short break with Netduino hacking I’ll start over on the next days to test an external power supply that I’ve bought some days ago. It has an adjustable volatge range from 3 to 12 V and comes with a variaty of connectors. This external power supply is intended to support projects to be run independently of an USB power source of a computer.

I also got two micro SD cards which hopefully will work with the Netduino and which will allow to store a decent amount of runtime data.

Over the course of the next days I’ll try to get the two things mentioned above up and running and as always I’ll share the results of my tests with you.

Comments Off on Next: external power supply and SD card

New piece of hardware: an LCD

Guess what I found at my desk when I came to the office today? 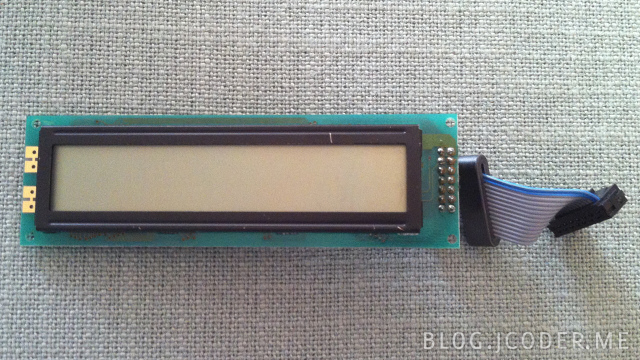 Saying thank you to my coworker Oliver for long-time renting me this 2×24 LCD with a HD44780 controller. I’m afraid that it’ll take some weeks to get it up and running, because currently I don’t have any breadboards, cables or things like that.

Comments Off on New piece of hardware: an LCD