First steps with the ATtiny 45

The ATMEL ATtiny 45 is an 8-bit programmable microcontroller chip. Some weeks ago I stumbled upon this How-To article by Matt from MAKE about the ATtiny 45 and with my last electronics order I got one (actually two, just in case I accidentially blew one up).

Yesterday I took the time and got it up and running:

Following the tutorial at the MIT Media Lab page it took no longer than 30 minutes to make the microcontroller drive two LEDs.

Although the tutorial was very helpful some things have changed in the current software versions, so (as promised in my last blog posting) this is what I did differently: 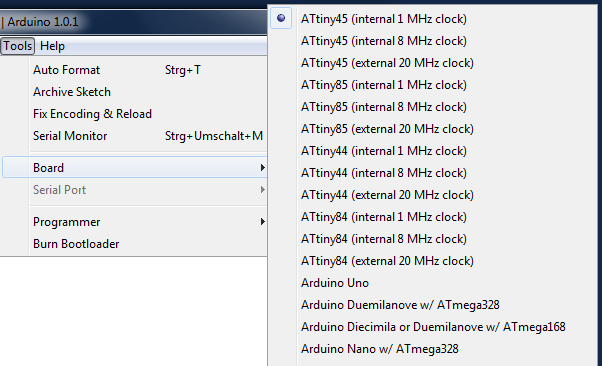 What’s next?
I’m not quite sure, but I think the ATtiny 45 is a cool chip, so I’m really looking forward to finding a good way to integrate it into upcoming projects.

Comments Off on First steps with the ATtiny 45